Interested in new games for Android? Want help with a game? This is the place to look!
Post Reply
19 posts

FREE TO PLAY ON MOBILE

Console quality HD gaming on your phone with customizable controls, voice and text chat, and thrilling 3D graphics and sound. Experience the thrill of the world’s most beloved shooter game, now on your phone for easy on-the-go fun.

Play iconic multiplayer maps from Call of Duty®: Black Ops and Call of Duty®: Modern Warfare®, available for the first time for free. Or squad up with friends in a brand new 100-person battle royale survival map. Join the fun with millions of players from all around world!

As you play CALL OF DUTY®: MOBILE you will unlock and earn dozens of famous characters, weapons, outfits, scorestreaks and pieces of gear that can be used to customize your loadouts. Bring these loadouts into battle in thrilling PvP multiplayers modes like 5v5 team deathmatch, frontline, free for all, search and destroy, sniper battle, and battle royale.

Use skill and strategy to battle to the top in competitive Ranked Mode or to win the most Clan prizes as you play with friends. Compete and fight against millions of friends and foes in this thrilling free to play multiplayer shooter.

Whether in gameplay, events, controls, or loadouts, CALL OF DUTY®: MOBILE offers complexity and depth in an ever-changing experience.


Feel like solving 3D riddles to a frenetic electronic soundtrack? It’s easy to get into the groove but can you stick to the beat?

A CAPTIVATING ATMOSPHERE
Welcome to the psychedelic world of Vectronom: experience waves of color and a pulsing geometric path that changes with the beat... All set to a hypnotic electronic soundtrack. There’s only one thing to do: turn up the volume and go with the flow. UNTZ! UNTZ! UNTZ!

SOLVE PUZZLES AT THE SPEED OF SOUND
Find your path through an ever-changing world, keeping the rhythm with every move you make. Think it sounds easy? The highly intuitive and addictive gameplay will keep you moving through daunting challenges... But how long will you last when the challenges get trickier and trickier? Better play to find out!

Co-produced and published by ARTE, Vectronom is the first video game from independent studio Ludopium. The prototype was developed in the Franco-German accelerator program Spielfabrique. The game has already won several awards, including “Best Game” at the Indie Arena Booth at Gamescom 2018 and GDC’s “Best in Play” 2019.

Move to the countryside, and cultivate a new life in this award-winning open-ended farming RPG! With over 50+ hours of gameplay content and new Mobile-specific features, such as auto-save and multiple controls options.

BUILD THE FARM OF YOUR DREAMS:

■ Turn your overgrown fields into a lively and bountiful farm

■ Raise and breed happy animals, grow a variety of seasonal crops and design your farm, your way

■ Customize your farmer and home! With hundreds of options to choose from

■ Settle down and start a family with 12 potential marriage candidates

■ Forage, grow crops and produce artisan goods to cook up as a delicious meal

■ Rebuilt for touch-screen gameplay on Android with mobile-specific features, such as auto-select to toggle quickly between your farming tools and auto-attack to swiftly take down fiendish monsters in the mines

■ Play the game your way with multiple controls options, such as touch-screen, virtual joystick, and external controller support. Create elaborate supply chains of conveyor belts to feed ammo into your turrets, produce materials to use for building, and defend your structures from waves of enemies. Play with your friends in cross-platform multiplayer co-op games, or challenge them in team-based PvP matches.

Graveyard Keeper is the most inaccurate medieval cemetery management sim of all time. Build and manage your own graveyard, and expand into other ventures, while finding shortcuts to cut costs. Use all the resources you can find. After all, this is a game about the spirit of capitalism, and doing whatever it takes to build a thriving business. And it’s also a love story.


- Face ethical dilemmas. Do you really want to spend money on that proper burger meat for the witch-burning festival, when you have so many resources lying around?
- Gather valuable materials and craft new items. Expand your Graveyard into a thriving business. Help yourself -- gather the valuable resources scattered across the surrounding areas, and explore what this land has to offer.
- Quests and corpses. These dead bodies don't need all those organs, do they? Why not grind them up and sell them to the local butcher? Or you can go on proper quests, you roleplayer.
- Explore mysterious dungeons. No medieval game would be complete without those! Take a trip into the unknown, and find discover new alchemy ingredients -- which may or may not poison a whole bunch of nearby villagers. 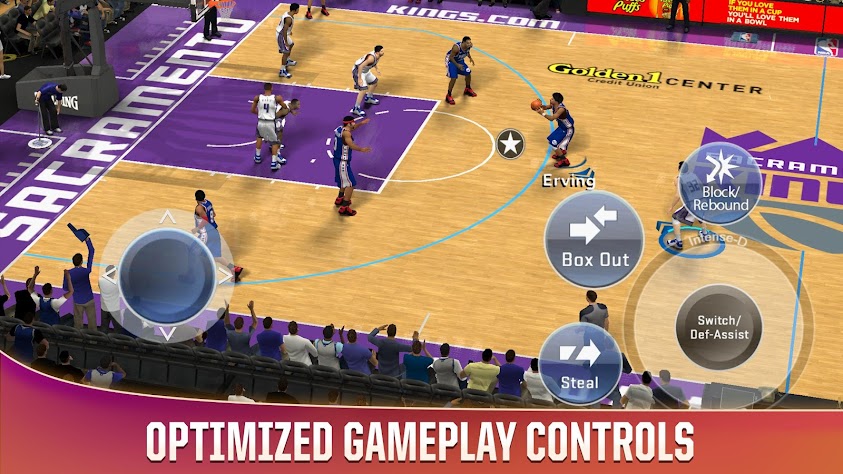 Take classic 2K action on the go with NBA 2K20 for mobile, featuring 5 new NBA Stories, a new MyCAREER storyline, and an all-new Run The Streets mode! From 5-on-5 basketball with current or all-time great NBA teams to streetball in Blacktop, NBA 2K20 is filled with a variety of game modes for all players.

Features:
ALL NEW RUN THE STREETS MODE
For the first time in any NBA 2K game, take your MyPLAYER around the world in a series of 3-on-3 streetball competitions. Get on a hot streak and takeover the game with greatly improved abilities and attributes. Compete against other players for a place on the Ranked Leaderboard or see how far you can go through the Championship.

NBA STORIES RETURNS
Experience the history of some of the most famous NBA players and teams with 5 new NBA Stories to play through.

NEW MyCAREER STORY
Build your MyPLAYER and go on your journey from college to the NBA. Will you have what it takes to earn your place among the NBA all-time greats?

THE ASSOCIATION
Take control of a team as the GM. Manage the roster, scout and draft the incoming rookie class, handle the budget, and more!

MULTIPLAYER
Finding opponents is easier and faster than ever before with a new Quick Match feature. Connect with other players through LAN or Google Play Games to play 5-on-5 matches or Blacktop games.

NEW 2K BEATS SOUNDTRACK
A new soundtrack accompanies you on your journey to the top of the NBA, featuring songs from Drake, Diplo, T-Pain, and more!

Fast-paced multiplayer battles from the makers of Clash of Clans, Clash Royale and Boom Beach.

Battle with friends or solo across a variety of game modes in under three minutes. Unlock and upgrade dozens of Brawlers with powerful super abilities. Purchase and collect unique skins to stand out and show off in the arena. Join or start a band to share tactics and fight together.

BATTLE IN MULTIPLE GAME MODES
- Gem Grab (3v3): Team up and out-strategize the opposing team. Collect and hold 10 gems to win, but get fragged and lose your gems.
- Showdown (Solo/Duo): A battle royale style fight for survival. Collect power ups for your Brawler. Grab a friend or play solo - be the last Brawler standing in the rowdiest battle royale yet. Winner take all!
- Bounty (3v3): Take out opponents to earn stars, but don’t let them pick you off. The squad with the most stars wins the match!
- Heist (3v3): Protect your team’s safe and try to crack open your opponents’. Navigate the map to sneak, blast and blow your way clear to the enemies treasure.
- Brawl Ball (3v3): It's a whole new Brawl game! Show off your soccer/football skills and score two goals before the other team. There are no red cards here.
- Special Events: Limited time special PvE and PvP game modes.

UNLOCK AND UPGRADE BRAWLERS
Collect and upgrade a variety of Brawlers with punishing SUPER abilities, level them up with power points, and collect unique skins.

BECOME THE STAR PLAYER
Climb the local and regional leaderboards to prove you’re the greatest Brawler of them all!

*Play the beginning for free as Demo"

Oddmar struggles with life in his village and is not worthy of a place in Valhalla. He is shunned by his fellow Vikings and must redeem himself of his squandered potential. One day he is offered an opportunity to prove himself, but at a price...

IMMERSE yourself in an epic Viking story animated as a motion comic.

DISCOVER your true power with magically imbued weapons and shields.

ENCOUNTER new friends and foes on your journey through magical forests, snowy mountains and treacherous mines.

An internet connection will initially be necessary to complete the download of app data for Oddmar.

Dig deep underground by shooting balls and breaking blocks, traversing your way to the planet cores. With limited shots per round and some blocks fixed firmly to the wall, thoughtfully strategize and aim for maximum impact. Knock down as many blocks as possible while collecting crystals for upgrades and getting deeper beneath the surface.
Choose your ideal upgrades such as more starting balls, more shots per round, or storing more crystals, based on your play style and overall strategy. Work your way into the procedurally generated planets with a delightful spectacle of bouncing as you get closer to the planet’s core.

Balance your plan between ball bouncing patterns and unpredictable, surprising bounces in this mesmerizing and curious game oozing with charm. Immerse yourself in a world of extravagant minimalistic art while jamming out to an original space acid soundtrack as you feel the satisfaction of digging further underground.

Inspired by the classic console greats, Battle Chasers: Nightwar is a wild adventure featuring deep dungeon diving, turn-based combat presented in a classic JRPG format, and a rich story driven by the exploration of the world. Help young Gully on her quest to find her lost father Aramus – a famous hero, who ventured into the dangerous grounds and mysteriously disappeared. Gully receives help from 5 unlikely heroes, each with their own unique abilities, perks, items and dungeon skills. Together the party will help Gully with her search and discover what dangers lurk in the wilds.

BATTLE
The classic turn-based combat is inspired by console RPG greats. Up to three fighters per side will battle it out, in tactically demanding encounters.

EXPLORE
A huge world awaits brave adventurers. Discover the secrets in the dark and mysterious forests or brace yourself against the icy horrors in frosty regions or fight wave after wave of enemies in Tolka’s Arena.

CRAFT
Each of your six heroes wears armor, carries a weapon and is equipped with fine magical jewelry – and everything can be crafted.

SURVIVE
Battle Chasers: Nightwar is packed with enemies. Bandits, Beasts, Demons, Elementals, Machines, Undead – you name it! It’s crucial to react properly to the enemy’s attacks. If you don’t synergize the efforts of your heroes, your adventure will be short-lived.